Expected to be completed in Fall 2023, the facility expansion will feature a black box theatre, new classroom space and a lobby featuring local artists.

ANNAPOLIS, Md.—Children’s Theatre of Annapolis (CTA) broke ground Thursday, July 28, 2022, on an expansion and renovation to its Bay Head Park theatre and facility. Anne Arundel County Executive Steuart Pittman and Delegate Heather Bagnall—a CTA alumna—joined the CTA Board of Directors for this exciting project, scheduled to be complete in Fall 2023. 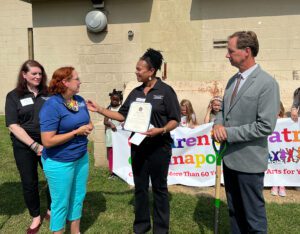 “This is a truly momentous day for Children’s Theater of Annapolis,” said CTA President Michelle Bruno. “As we look to continue the growth of supporting both the community and child here in Annapolis, and Maryland overall, I want to speak to what this will enable us to do. This growth will allow CTA to grow in theatre opportunities, education opportunities, performance opportunities for the broader community, expansion into the visual arts arena, and so much more.”

At the groundbreaking, Pittman also shared the impact that theatre has had on his life, starting when he was cast as Peter van Pels in a high school production of The Diary of Anne Frank.

“It really did turn my life around,” he said. “Being onstage and being able to be not me, but somebody else, and then express myself. … It’s a really difficult age. When I look back on being able to get in front of a group of people and talk to them—it was just such a big turning point in my life that it feels really good to make it possible for others.”

The expansion, which will include the renovation of CTA’s current annex into a black box theatre, will also include two new classrooms, office space and a lobby that will feature local artists, as well as a rain garden immediately outside the building. The new classrooms will allow CTA to expand its educational offerings, while the black box theatre will allow for the staging of smaller productions featuring material that will challenge and inspire young performers.

0 comments on “CTA Breaks Ground on Facility Expansion and Renovation”